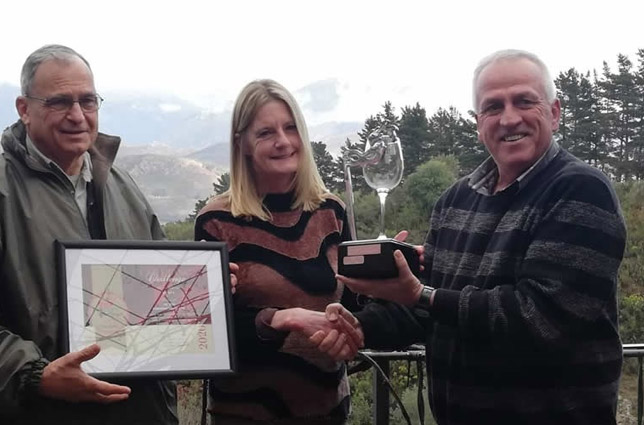 My Wyn, a small winery in the hills of Franschhoek, has won the inaugural Cobie van Oort Cabernet Franc Trophy for the highest score during the 2020 Cab Franc Challenge.

For the first time since the inception of the Challenge in 2016, it was decided to award the highest scoring wine overall with a floating trophy.  This trophy is called the Cobie van Oort Cab Franc Challenge Trophy and the inaugural winner is My Wyn from Franschhoek.  Winemaker Jacoline Haasbroek felt it was a great honour and the trophy will be displayed in her tasting room for the next year!  Cobie passed away suddenly on 24 June and a suggestion was made to create this award in her legacy.

Cobie, who together with Celia Gilloway from Events by Celia, started the Cabernet Franc Challenge in 2016 with 33 entries, which has subsequently grown by more than 50%.

Celia suggested that a trophy, in honour of Cobie, would let her legacy live on in the minds and hearts of all producers and Cab Franc Lovers.  Cobie was extremely passionate about the varietal and felt that something had to be done to expose this “Bordeaux Grape” to a much bigger audience.  Cobie also initiated the first Cab Franc Carnival, which was held at Avontuur Estate in 2015.

The Cabernet Franc Challenge is a 100% blind tasting, judged by 5 well respected and experienced tasters from the industry.  This year’s panel was once again led by Chair Christine Rudman, Greg Mutambe, Malu Lambert, Lizette Tolken and Fiona McDonald.

Christine commented on the 2020 Challenge with the following: “There were 52 entries, the same as in 2019, and while many of the previous winners participated, there were also some new entries. Judging out of 100.

With Covid 19 putting a stop to large gatherings of people and therefore making it impossible to host the 2020 Cabernet Franc Carnival at the Vrede en Lust winery in the Franschhoek Region, Cab Franc Lovers’ will need to wait until 2021 to attend this very popular event. 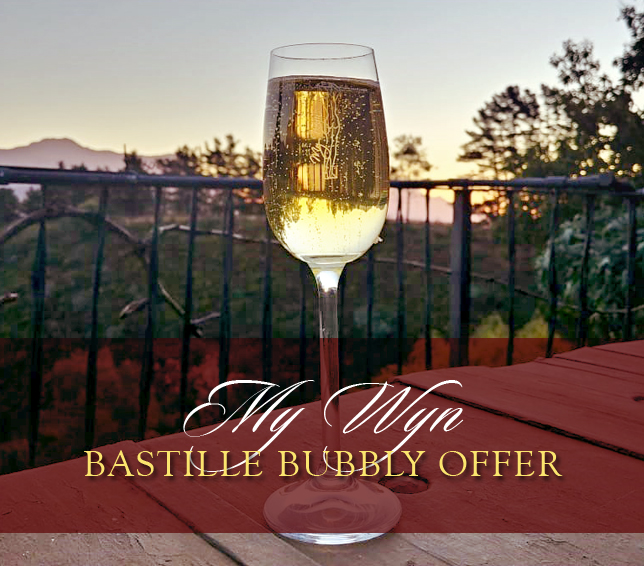 It is time to celebrate all those lonely lock down birthdays, anniversaries, special moments or achievements.
Nothing better than a glass of My Wyn MCC Sparkling wine. Buy any 11 bottles of either the MCC Extra Brut or The MCC Blanc de Blancs, or a mixed case of both at R2380 and get an extra bottle for free.

The 5th Cabernet Franc Challenge impressed with 52 entries (the same number as in 2019), with many wines entered by previous participants and a few new wineries who took the plunge this year. Winners were announced in the Top 6 Category, the Blends Category and the Vintage Category. A Best Value Winner was also again selected by the organisors. Thirty-Six additional Gold medals were awarded across all categories as well.

Cape Wine Master and head of the judging panel since the start of the competition, Christine Rudman commented about the geographical spread of entries; “Once again Stellenbosch, with the most plantings, dominated, but Franschhoek and Paarl had a significant number of entries. The rest came from Robertson, Darling, Elgin, Bot River, Constantia, Cape Town/Durbanville, Wellington and Coastal. Of the 31 producers represented, 13 entered more than one wine, showing a growing Cabernet Franc specialisation.”

The vintage winner for this year is My Wyn Cabernet Franc 2012 from Franschhoek, which was supported by excellent Gold Medal entrants in this category. The panel was particularly impressed by the 6 older wines (vintages 2012 – 2015), proving just how well Cabernet Franc with good credentials can age. The wines were delicious, in perfect drinking condition, yet still had a cellaring future.

Three winners emerged in the Blends Category. They are Landskroon Paul Hugo Red 2018, Morgenster Lourens River Valley 2011 and Warwick Trilogy 2016. The Best Value Award was given to Ondine Cabernet Franc 2015 by Darling stalwart Ormonde Vineyards, which retails at R115 per bottle.

The judging panel was made up of Christine Rudman, Lizette Tolken, Greg Mutambe, Fiona McDonald and Malu Lambert. Christine explains a bit more about the judging procedure: “Judging out of 100, the panellists were given no origin or vintage information, except being told the category – older wines, blends, main entries. The only discussion permitted was after the tasting, where general comments were asked for.”

“In the main judging category, the panel looked for attributes that define the variety, giving it uniquely its own personality. There were fewer herbaceous notes across the range than in 2019, a reflection of the vintages, mainly 2017, with some 2018 and 2016. The best wines had balance, elegance, suppleness and complexity, showing layers of fruit and tertiary perfumes and flavours,” she commented.

The judging took place at Cab Franc Carnival 2020 sponsor and venue host Vrede en Lust Estate in Simondium on Tuesday, 17 March. The results were independently audited and verified by Cecil Kilpin & Co. The Top 6 can be tasted in two tutored tasting sessions at this year’s Cab Franc Carnival, which takes place at Vrede en Lust Estate on Saturday, 22 August from 11h00-16h00. Tickets for the event and the intimate tutored tasting sessions can be purchased from www.plankton.mobi.

To see the full list of category winners and gold medallists, visit www.cvomarketing.co.za

Nine wineries celebrated their achievements in the Cabernet Franc Challenge on Wednesday, 18 April at Avontuur Estate at this year’s Awards ceremony.

“This is the third year of the Challenge and we are lucky that three of the five judges were involved from the beginning, which leads to consistency. The judges were myself, Lizette Tolken, Samarie Smith, Anita Streicher-Nel and Tinashe Nyamudoka,” says judging panel convenor Christine Rudman. “Some changes were brought in like the 100 point scoring system which fine tuned the scores much more and obviously we had the new Blend category where Cab Franc had to dominate.”

The Top Three Blends are Alto Rouge 2016, Kunjani Red Blend 2015 and Morgenster Lourens River Valley 2011. In the Vintage class Holden Manz wines were top of the list again with their Cabernet Franc Reserve 2013 and Ormonde Ondine Cabernet Franc 2015 richly deserves their special award for the Best Value Wine on show at only R95 per bottle.

“Another interesting aspect is that only 3 of the 50 wines entered were under R100, which shows that winemakers value what they’ve got. This is not a generic wine category and bargains are basically non-existent. This year’s Challenge gave a very good overview of the 2015 vintage specifically, as 26 of the 44 wines entered in the Top 6, were from that vintage,” Christine added.

The judging was done blind and the process and results were audited by Moore Stevens Stellenbosch.

The Top Six Cabernet Francs are exclusively available through Wine of the Month Club as a mixed pack selection, whilst stocks last.

In addition the public can taste the Top Six at the Cabernet Franc Carnival at Avontuur Estate on 19 May at one of three tutored tastings at 11h30, 13h00 and 14h30 respectively. Only 20 persons per tasting. The tasting will be presented by Christine Rudman

Tickets for the Carnival can be bought from www.plankton.mobi at R220 pp or R250 at the gate. This includes the tastings of 22 of SA’s best Cab Franc producers, a branded glass and a R50 food coupon to spend on the day. Tickets for the tutored tastings are available at R100 pp on www.plankton.mobi as well and must be pre-booked. More information available at www.cvomarketing.co.za

A Little Bit About Me

Jacoline Haasbroek alias My Wyn. Some people forget my name but remember me as “ the woman from My Wyn”. My Wyn started in 2001 when I decided to round off my Wine Diploma II, presented at the time by the Cape Wine Academy, by buying a ton of grapes and making my own wine rather than by doing their Wine Master course. Wanted to see whether what I had learnt on paper also worked in practice. Thanks to some excellent grapes, Shiraz from La Motte, Franschhoek and the help of many knowledgeable friends, my first effort was a success, delivering a sought-after wine and the inspiration to continue. Today, nine years later, I am still making Shiraz from the same La Motte grapes. I have now also branched out to other cultivars and am a member of the Franschhoek Vignerons, where I am recognised as their smallest cellar.